The PetroCaribe Development Fund, is a body corporate created by the Government of Jamaica in December 2006 to manage the proceeds which accrue to Jamaica under the PetroCaribe Energy Cooperation Agreement through an Amendment to the Petroleum Act in 2006.

Under the Agreement, the Government of Venezuela agreed to convert a portion of each payment due for petroleum products supplied to PetroJam Ltd., the state-owned refinery, into a long-term concessionary loan.

The inflows that accrue to Jamaica under the arrangement are managed by the Fund and are used to provide loan financing to the Ministry of Finance and Planning and self-financing public bodies for critical development projects. The Fund also maintains a portfolio of investments to enhance its overall returns and provide liquidity for GOJ debt servicing and operational expenses.

The economic and social transformation of the country

The strategic objective of The Fund is to utilize the available resources to promote the goals of the PetroCaribe Energy Cooperation Agreement which is to contribute to the country’s economic and social transformation. Its operations must be financially sustainable so as to ensure that the resources are available to service the debt obligations to Venezuela as they become due.

The resources of The Fund may be used for the following purposes:

Benefits for the most vulnerable in the society

The Fund also operates a grant facility through which investments are made in projects and programmes which benefit the most vulnerable in the society and their communities. Resources for this aspect of its operations flow from the surplus generated by its loan financing and investing activities.

As sated above, the PetroCaribe Development Fund provides loan financing to the Ministry of Finance and Planning and self-financing public bodies for critical development projects. These loans are intended to support the achievement of the strategic objectives of the Government and to promote the goals of the PetroCaribe Energy Cooperation Agreement for social transformation and economic development of participating countries.

The Board of Management established a grant facility to support projects that would directly improve the welfare of the most vulnerable members of the society. This initiative is in keeping with the mandate of the PetroCaribe Energy Cooperation Agreement which has among its fundamental objectives the eradication of social inequalities through fostering improved standards of living for the people of the region. The Facility is financed by utilizing a portion of the surplus generated from the Funds’ lending and investment activities and is used to finance socio-economic projects which are consistent with the goals of Vision 2030, Jamaica’s National Development Plan.

During the FY2013/14, a J$85 million grant was approved for the Caribbean Maritime Institute for the establishment of an Advanced Skills Training and Innovation Centre to support vocational training for maritime facilities and the planned build-out of the port facilities under the Logistics Hub Programme. The Centre will provide qualified persons with training in the field of industrial automation and mechatronics and will be implemented in partnership with German company, FESTO Didactic, a world leader in industrial automation technologies training.

The Centre will produce certified technicians needed for the maintenance and operation of ports to meet not only the demand in Jamaica, but also regionally and internationally. Local partners such as the Heart Trust NTA, University of Technology and the University of the West Undies will also facilitate training and certification of students.

Under a grant of J$20 million from the PetroCaribe Development Fund, 10,000 students benefitted from non-traditional teaching methods aimed at improving their learning patterns from an initiative undertaken at the Hope Zoo in St. Andrew. The engagement, an education project tour, was jointly implemented by the Ministry of Education, Jamaica Social Investment Fund (JSIF), and the Hope Zoo Preservation Foundation. It targeted children, aged 3 to 17 years, who were enrolled in public early childhood institutions, primary schools, and high schools, as well as youngsters with special needs and wards of the State.

The project provided social, cultural and environmental support to the national curriculum. It sought to convey a greater sense of civility and social responsibility as students were sensitized to good practices in solid waste management and renewable energy. The lesson plan also offered opportunities for integrated learning and taught the children how to carefully and respectfully interact with animals, the environment and their peers.

In August 2010, loan financing totaling $894 million (US$11 million) was approved for the UDC to support the redevelopment and upgrade of the town of Falmouth. This was in tandem with the construction of a cruise pier and terminal by the Port Authority of Jamaica and Royal Caribbean Cruise Lines to accommodate the Oasis of the Seas, the largest cruise ship in the world. Of the approved amount, approximately $154.6 million (US$1.8 million) was disbursed during that year.

Under the project, the UDC focused on upgrading the physical and social infrastructure of Falmouth to enable the town to capitalize on the benefits of the tourist traffic and to improve the condition of the historic town for its residents. The project will result in the construction of a new regional headquarters for the Jamaica Constabulary Force, improved solid waste collection, traffic management and relocation of squatters to improve conditions just outside of the town.

RISE Life Management Services Solar Energy Project benefited from the approval of a grant from the Fund valued at J$2.5 million during FY2013/14. With the Fund’s support, the organization launched an Energy Conservation Initiative for their operations through the installation of a grid-tied solar photovoltaic system. This system consists of approximately 78 solar panels to provide three-phase power to the entire facility offering an average of 23,750 kilowatts per hour per month. It is expected that the reduction in energy costs associated with operating such a facility will significantly reduce energy costs thus allowing the organization to focus on expanding its programmes for the vulnerable communities they serve.

RISE Life Management Services is a non-governmental organization which was established in 1989. It provides community based educational and social services, life, social and vocational skills training and counseling services.  Approximately 5,000 individuals directly benefit from the services offered by RISE and the organization often operates as a community centre and safe haven for children and young people from surrounding inner-city communities. 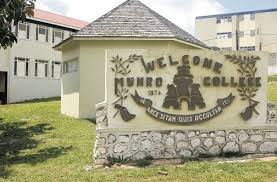 In 1996, a 225KW wind turbine was installed at the Munro Wind Park, St. Elizabeth. The school benefited from a grant to rehabilitate the wind turbine through the Wigton Wind Farm Limited – Wind Energy Awareness Programme.

The wind farm at Munro College provides an opportunity for students of the college to participate in this pioneering step in Jamaica’s wind energy programme which is of national, historical and technological significance.

The partnership between the Fund and JSIF is facilitated through a Memorandum of Understanding signed in 2011. Through this partnership, a Schools Sanitation Project was implemented which has to date benefited some 3,287 students from 28 schools across the island. The project provided for new sanitation blocks equipped with septic tanks, toilets, urinals and ramps to facilitate access by physically challenged persons. These facilities replaced pit latrines which long existed at the schools.

An important partnership is with the Private Sector Organization of Jamaica for the implementation of the Y.U.T.E. Programme. Y.U.T.E. sought to increase access to employment through skills training and certification and career preparedness for unattached young people living in inner-city communities. The partnership supported training and certification and community-based opportunities to young people between the ages of 18 and 29 and has served 295 young persons through a contribution of J$20 million.

The Fund contributed to the Jamaica 50 legacy programme by providing a J$209 million grant to establish a scholarship programme aimed at supporting the education of awardees at the secondary and tertiary levels.

Recipients had to demonstrate that they are of exemplary character with leadership qualities. They must also represent the aims of the scholarship programme which seeks to promote a generation committed to contributing meaningfully to national development. Upon completion of their studies, the tertiary level scholarship awardees will be required to work in Jamaica for a period of up to five years.

The construction of the Simon Bolívar Cultural Centre in Downtown Kingston is intended to strengthen the cross-cultural links between the Caribbean and Latin America and aids in the re-establishment of Downtown Kingston (Parade) as the Cultural District of the city.

Simon Bolívar is a hero in much of Latin America and Hugo Chavez invoked his name for his Bolivian Revolution. It is anticipated that the Centre will open in 2014 and it will showcase art, artifacts, and other bits of culture representing the cross-cultural linkage.