“There is nothing more inhuman during a pandemic than to block a country”, President Alberto Fernandez pointed out.

On Monday, Argentina’s President Alberto Fernandez addressed the economic and social situation of Cuba and Venezuela and ratified his position in favor of ending the U.S. economic blockades against these nations.

“This policy has prevented Cuba and Venezuela from accessing artificial respirators. Realize what that means”, Fernandez said, stressing that those who suffer the consequences of the blockades are not governments but the peoples.

Regarding Cuba, where the authorities are victims of a U.S.-promoted smear campaign, the Argentine president commented that the internal affairs of each country must be resolved without the intervention of third parties.

“Although we must promote dialogue and peace among the peoples, neither Argentina nor any country should tell a nation what it has to do or not to do”, Fernandez said, adding that if the international community is so concerned about what happens in Cuba and Venezuela, it should end the blockades.

In Venezuela, the U.S. blockade have caused a 99 percent fall in foreign exchange earnings since 2018. This illegal coercive measure have also affected the country’s access to medicines and food amid the COVID-19 pandemic.

Cuba have suffered the consequences of this policy for over 60 years. On June, the United Nations General Assembly almost unanimously approved a resolution demanding the end of this coercive measure.

On Monday, Cuba’s President Miguel Diaz-Canel assured that the United States has supported transnational actions to discredit the revolutionary government and fracture the unity of the Cuban people. 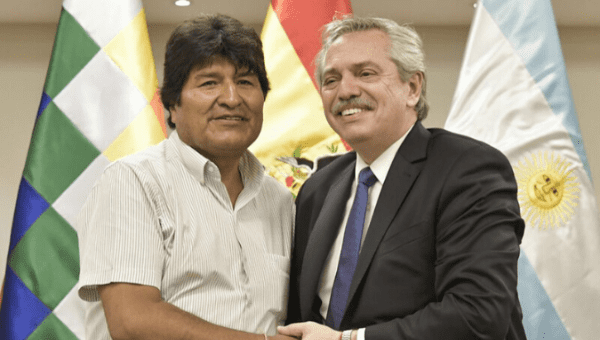 Argentinian government officials told right-wing press outlet Infobae that President Alberto Fernandez ratified his support and protection to Evo Morales and that they will not deliver him to judicial authorities in Bolivia.

Argentinian President Alberto Fernandez announced Thursday that his government “will not hand over for any reason” the former president of Bolivia Evo Morales who is in Buenos Aires under refugee status and who on Wednesday received an arrest warrant by the Bolivian Prosecutor’s Office, which accuses him of sedition and terrorism.

A senior official at the Casa Rosada (Argentina’s Government Resident) revealed to the national news outlet Infobae that the Argentinian president contacted Morales to give him his full support and assure him that his country will protect his physical integrity and prevent him from being handed over to the judicial authorities in Bolivia that currently is under the control of a de facto government.

“We are going to protect Evo Morales because it is appropriate to do so as a political refugee and because the entire request for detention is a farce,” another government official told Infobae.

On Wednesday morning, the Bolivian Prosecutor’s Office issued a warrant for the arrest of Morales “for the alleged commission of the crimes of sedition, terrorism and the financing of terrorism.”

The order deals with the accusation of the de facto government of Jeanine Añez last Nov. against Morales, who was accused of inciting violence from his asylum in Mexico, a country that first received him, during the demonstrations following the coup against his government.

The complaint is based on supposed evidence that includes a video in which a voice attributed to Morales is heard, the authenticity of which has been challenged by critics as it has only been presented by the Añez government, and not by other independent sources.

For the Argentinian government, Morales will continue to have immunity and diplomatic protection because he is a refugee and they will not accept his arrest within Argentinian territory, so it was determined that the security of the ex-president who until a few days ago had only two police officers, would be increased, Argentinian officials told Infobae.

Also, the Fernandez government through its Foreign Ministry is analyzing the request for arrest from Bolivia in order to submit a legal response for the rejection of this order.

For his part, Morales, through his Twitter account, denounced on Wednesday that the order against him is “unjust, illegal and unconstitutional” and said he was not afraid of threats and that he will continue to fight for a free and sovereign Bolivia.

Morales resigned on Nov. 10 after protests that accused him of alleged fraud in the elections of Oct. 20 and which were led by the right-wing opposition, the civic committees and which ended in a coup d’etat after pressure from the armed forces and the intervention of the Organization of American States (OAS).

Critical, even with those who are today his main allies, lover of rock and ‘heavy user’ of social networks, this expert behind the scenes will occupy for the first time the most important position in the life of any politician.