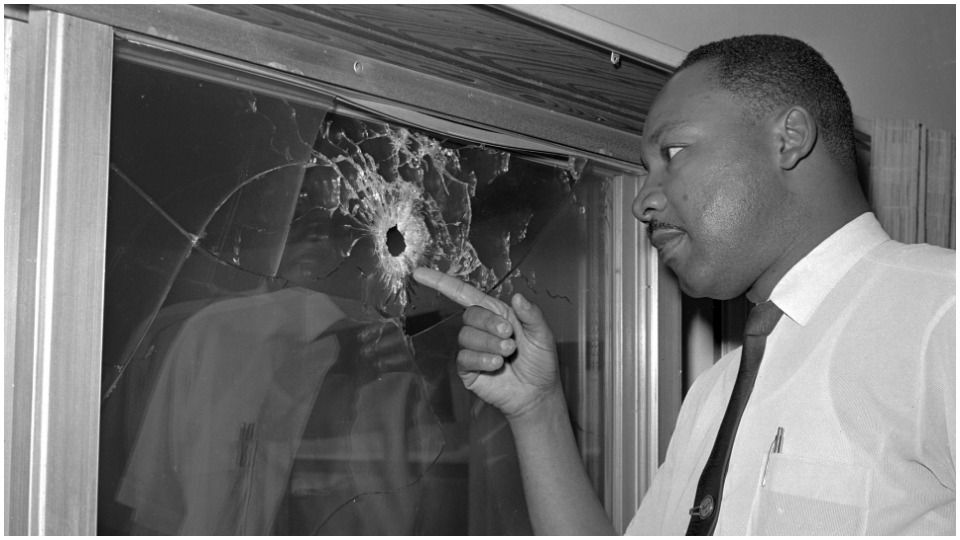 Racist violence and economic injustice were among the problems Dr. Martin Luther King laid at capitalism’s doorstep. Here, King looks at a glass door of his rented beach cottage in St. Augustine, Fla. that was shot into by someone unknown on June 5, 1964. | Jim Kerlin / AP

Throughout his life, Rev. Martin Luther King, Jr. spoke often and with vision about the nature of capitalism and the kind of changes needed to replace it. The following quotes reflect some of King’s key thoughts on the subject. The power of his words speaks as much to the present day as they did to the turbulent times he witnessed.

“I imagine you already know that I am much more socialistic in my economic theory than capitalistic… [Capitalism] started out with a noble and high motive… but like most human systems it fell victim to the very thing it was revolting against. So today, capitalism has out-lived its usefulness.” – Letter to Coretta Scott, July 18, 1952.

“In a sense, you could say we’re involved in the class struggle.” – Quote to New York Times reporter, José Igelsias, 1968.

“And one day we must ask the question, ‘Why are there forty million poor people in America?’ And when you begin to ask that question, you are raising questions about the economic system, about a broader distribution of wealth. When you ask that question, you begin to question the capitalistic economy. And I’m simply saying that more and more, we’ve got to begin to ask questions about the whole society…” – Speech to Southern Christian Leadership Conference Atlanta, Georgia, August 16, 1967.

“Call it democracy, or call it democratic socialism, but there must be a better distribution of wealth within this country for all God’s children.” – Speech to the Negro American Labor Council, 1961.

“We must recognize that we can’t solve our problem now until there is a radical redistribution of economic and political power…. This means a revolution of values and other things. We must see now that the evils of racism, economic exploitation, and militarism are all tied together… you can’t really get rid of one without getting rid of the others… the whole structure of American life must be changed. America is a hypocritical nation and [we] must put [our] own house in order.”- Report to SCLC Staff, May 1967.

“The evils of capitalism are as real as the evils of militarism and evils of racism.” – Speech to SCLC Board, March 30, 1967.

“I am now convinced that the simplest approach will prove to be the most effective—the solution to poverty is to abolish it directly by a now widely discussed matter: the guaranteed income… The curse of poverty has no justification in our age. It is socially as cruel and blind as the practice of cannibalism at the dawn of civilization when men ate each other because they had not yet learned to take food from the soil or to consume the abundant animal life around them. The time has come for us to civilize ourselves by the total, direct and immediate abolition of poverty.” – Where do We Go from Here?, 1967.

“You can’t talk about solving the economic problem of the Negro without talking about billions of dollars. You can’t talk about ending the slums without first saying profit must be taken out of slums. You’re really tampering and getting on dangerous ground because you are messing with folk then. You are messing with captains of industry. Now this means that we are treading in difficult water because it really means that we are saying that something is wrong with capitalism.” – Speech to his staff, 1966.

“[W]e are saying that something is wrong … with capitalism…. There must be better distribution of wealth and maybe America must move toward a democratic socialism.” – Speech to his staff, 1966.

“If America does not use her vast resources of wealth to end poverty and make it possible for all of God’s children to have the basic necessities of life, she too will go to hell.” –  Speech at Bishop Charles Mason Temple of the Church of God in Christ in support of the Memphis sanitation workers’ strike on March 18, 1968, two weeks before he was assassinated.