The Greek prime minister made clear that a Syriza government would follow through on its campaign promises and rollback austerity policies. 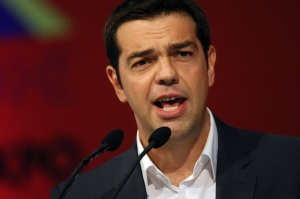 In his first major speech as prime minister Sunday, Alexis Tsipras reaffirmed his government’s commitment to end the country’s “cruel” austerity program and begin to heal the “wounds” caused by the reforms imposed by previous governments.

“The first priority of this government … is tackling the big wounds of the bailout, tackling the humanitarian crisis, just as we promised to do before the elections,” declared Tsipras.

The Greek prime minister listed a series of measures his government will embark on, including: ending mass layoffs, while reinstating laid off public sector workers; immediately reintroducing collective wage bargaining; introducing a law to stop home foreclosures; and ending to the “crime” of selling off state property.

He also stated that the government would offer free energy, housing and health care to the “victims of the cruelty of the bailout.”

Fiercely opposed to the continuation of austerity policies

Tsipras also made clear that his government is fiercely opposed to an extension of the bailout package, as an extension would mean the continuation of the austerity policies that Greek voters rejected in elections. Instead the government is seeking to reach a deal on a temporary so-called “bridge” agreement within the next 15 days to keep Greece afloat.

“The Greek people gave a strong and clear mandate to immediately end austerity and change policies,” said Tspiras. “Therefore the bailout was first canceled by its very own failure and its destructive results.”

The British newspaper the Guardian, reported that the former head of the U.S. Federal Reserve, Alan Greenspan, said that it was only a matter of time before the country left the eurozone. Greenspan was one of the major architects behind the international banking system that led to the 2007 financial crisis.

Greece and the eurozone

However, Greek Finance Minister Yanis Varoufakis said Sunday that forcing Greece out of the eurozone would result in the collapse of the whole currency bloc. He contends that Greece is not the only country facing difficulties paying its loans.

“The euro is fragile, it’s like building a castle of cards, if you take out the Greek card the others will collapse,” Varoufakis told Italian state television network RAI.

The new Greek government may have found an unlikely ally in the United States. The Financial Times reported Sunday that the Obama administration has been lobbying eurozone leaders to compromise more with Greece’s new government.

Policymakers in the U.S. appear to be concerned that a protracted budget standoff could damage the global economy.

Some members of the eurozone, particularly Germany, have taken a hardline stance and insist that Greece must press on with its budget-cutting commitments.

“There are limits to how much austerity a society can withstand,” the Financial Times cited a senior U.S. official as saying.

U.S. officials are expected to raise their concerns about the standoff with Greece at this week’s meeting of the Group of 20’s finance ministers in Istanbul, Turkey, and during bilateral meetings in Washington, D.C., Monday between Obama and German Chancellor Angela Merkel, the Financial Times reported.