AFRICAN nationals from the countries that will represent the continent at the upcoming Federation of International Football Association (FIFA) World Cup are confident the teams will make an impression at the tournament.

Ahead of the tournament, the African teams have struggled to shrug off the “underdogs” tags that they have carried to the tournament since Egypt became the first African country to participate in the tournament in 1934. 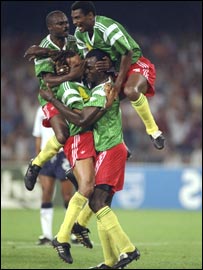 Cameroon will be the first African team to take to the field in Brazil for a clash against Mexico on Friday.

“We stand a good chance against the Mexicans. I dispute suggestions that they are the favourites. Like our team, the best they have progressed in this tournament is the quarterfinals,” said Freddy Beti, a Johannesburg-based Cameroonian.

“If we manage to overcome the problems that resulted in the players initially boycotting the flight to Brazil over bonuses, I am certain we will progress from the group stages and progress even further.

“We are also grouped with Croatia and Brazil in the co-called Group of Death but because other teams are touted as favourites, there is less pressure on us,” he said.

Ghanaian, Janet Akua, also rooted behind her Black Stars holding their own in the tournament.

The Ghanaians, who are most favoured to shine by those who are neutral, are grouped alongside Germany, Portugal and USA in what, on paper, is also difficult group.

“We held our own in South Africa four years ago. Had it not been for unfair play by the Uruguayan player (Luis Suarez) and dubious match officiating, we could have created history by reaching the semifinals and who knows what might have happened as the tournament progressed,” said Akua.

The incident she was referring to is still fresh in the memory of Africans, most of whom have not forgiven Suarez for denying Ghana victory when he deliberately handled a goal-bound ball as Uruguay stared defeat against Ghana in the quarterfinals.

Asamoah Gyan crashed his effort against the post but replays suggested a re-take should be awarded as the Uruguayan players encroached into the box.

Another side eager to redeem themselves after forgettable previous spells at the tournament is Nigeria, the African champions.

Ini Dominic tipped the Super Eagles for success in Brazil.

“Unlike in previous tournaments, we have a squad that is united and committed to the national jersey. Our coach, Stephen Keshi, has assembled a side that is driven by the will to win.

“Under him the team is playing an exciting brad of football that nonetheless does not compromise results. This team will go far and can beat anyone on any given day,” he said.

Nigeria are pooled alongside Argentina, Bosnia and Herzegovina and Iran.

“We are in a relatively easy group but should not get carried away,” Dominic warned.

While it is irrefutable the Africans have largely disappointed, there is no denying the fact that they have left an indelible mark on the World Cup.

From the Roger Milla-led Cameroon outfit that lit Italia 90, the underrated Senegalese that captivated Japan/Korea 2002 to the wronged-but-gracious Ghanaians that won the hearts of millions worldwide in South Africa 2010, they have surely been worthy proponents of the Beautiful Game. 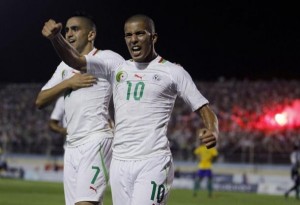 Pitted against Burkina Faso in the compulsory African section playoffs, Algeria were facing the very real prospect of missing out on the 2014 World Cup. The Fennec Foxes fell to a 3-2 defeat in Burkina Faso, but were able to sneak through on away goals after a 1-0 win in Blida, with a goal from skipper Bougherra.

This tournament will mark consecutive World Cup’s for Algeria for the second time in their history. And whilst most will remember their dreary and abrasive efforts in the 2010 World Cup, this is a team much improved from the one that played in South Africa four years earlier.

2 thoughts on “World Cup: Africa Firmly Behind Its Teams”