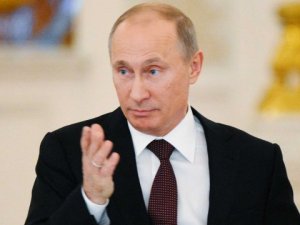 Russian President Vladimir Putin has declared ‘utter nonsense’ the idea that the Syrian government has used chemical weapons on its own people and called on the US to present its supposed evidence to the UN Security Council.

Putin has further called the Western tactic a ‘provocation.’

Washington has been basing its proposed strategy of an attack on Syria on the premise that President Bashar Assad’s government forces have used chemical agents, while Russia finds the accusations unacceptable and the idea of performing a military strike on the country even more so. Especially as it would constitute a violation of international law, if carried out without the approval of the UN Security Council.

6 thoughts on “Putin: US should present Syria evidence to Security Council”